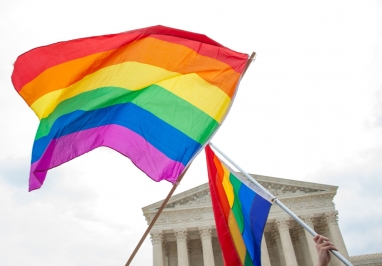 On June 15, 2020, the Supreme Court of the United States (SCOTUS) decided a landmark case for LGBTQ+ rights. The decision, Bostock v. Clayton County, Georgia, concerned three separate cases, all involving an employer which allegedly fired a long-time employee simply for being homosexual or transgender. Gerald Bostock was fired from his position as a child welfare advocate—a position he’d held for more than a decade—after several community leaders took issue with his participating in a gay recreational softball league. Altitude Express was another employer with suspicious timing—skydiving instructor Donald Zarda tried to calm a customer uncomfortable with his closeness during a tandem jump by mentioning that he was gay. Days later, Mr. Zarda was fired. Finally, R. G. & G. R. Harris Funeral Homes fired Aimee Stephens, who started work with the company presenting as a male, was later diagnosed with gender dysphoria, and in her 6th year of employment informed the company that she planned to “live and work full-time as a woman” following her return from a vacation. The funeral home told Stephens, “This is not going to work out.”

The three cases, all alleging discrimination based on sex under Title VII of the 1964 Civil Rights Act, were tried in different jurisdictions (the Second, Sixth & Eleventh Circuits) and led to different results, highlighting the circuit split on whether sexual orientation and/or transgender status falls under the Title VII protected class of “sex.” Title VII makes it “unlawful . . . for an employer to fail or refuse to hire or to discharge any individual, or otherwise to discriminate against any individual . . . because of such individual’s race, color, religion, sex, or national origin.” SCOTUS took up the combined cases to finally resolve the issue of whether an individual who suffers discrimination because of their sexual orientation or gender identity is being discriminated against because of their sex.

In the most significant decision for LGBTQ rights since the 2015 Obergefell decision made same-sex marriage legal nationwide, Justice Neil Gorsuch stated “[a]n employer who fires an individual for being homosexual or transgender fires that person for traits or actions it would not have questioned in members of a different sex. Sex plays a necessary and undisguisable role in the decision, exactly what Title VII forbids.”  In reaching this conclusion, the Court offers a number of analogies and examples to explain its reasoning.  One of the examples is as follows:

Consider, for example, an employer with two employees, both of whom are attracted to men.  The two individuals are, to the employer’s mind, materially identical in all respects, except that one is a man and the other a woman.  If the employer fires the male employee for no reason other than the fact he is attracted to men, the employer discriminates against him for traits or actions it tolerates in his female colleague.

You can read the full text of the Bostock opinion, including the dissenting opinions from Justice Alito (joined by Justice Thomas) and Justice Kavanaugh here.

The impact of this decision on employers will depend on a number of factors.  For example, many state and local governments already prohibited discrimination based on sexual orientation and gender identity.  Additionally, many employers already prohibited such discrimination or harassment whether it was legally required or not.  For such employers, this decision may not impact their day to day operations a great deal.  Employers who did not operate in such jurisdictions and did not have such personnel policies, though, will want to re-evaluate their current company policies and procedures.

In light of this decision, all employers should consider refreshing their anti-discrimination and anti-harassment training materials.  Such materials should clearly reflect that neither discrimination nor harassment will occur on the basis of sexual orientation or gender identity.  Training should be considered for employees on what may be considered discriminatory or harassing behaviors towards individuals identifying themselves on the LGBTQ+ spectrum.  For example, some employees and supervisors may not understand the importance of using a person’s preferred pronouns.  Following this decision, claims based on discrimination against individuals based on sexual orientation or gender identity are certainly more likely to be brought.  A prompt review of an employer’s anti-discrimination and training materials in light of this decision is critical to avoiding potential liability and complying with the employer’s legal obligations.