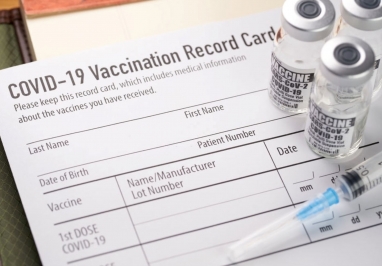 On September 24, 2021, the Biden Administration, through the Safer Federal Workforce Task Force (“Task Force”), published its COVID-19 Workplace Safety Guidance for Federal Contractors and Subcontractors (“Guidance”).  The Guidance generally requires all “covered contractor employees” of “covered” contractors or subcontractors (of any tier) who are (i) working on or in connection with a “covered contract,” or (ii) working at a “covered contractor workplace” to be fully vaccinated for COVID-19 unless they qualify for an accommodation by December 8, 2021.  Understanding the applicability of each of these terms is critical to determining whether an entity is covered by the vaccination mandate.

(i)     it is a procurement contract or contract-like instrument for services, construction, or a leasehold interest in real property;

(iii)   it is a contract or contract-like instrument for concessions, including any concessions contract excluded by Department of Labor regulations at 29 C.F.R. 4.133(b); or

(iv)   it is a contract or contract-like instrument entered into with the Federal Government in connection with Federal property or lands and related to offering services for Federal employees, their dependents, or the general public.

From this universe of contracts or “contract-like instruments,” the Executive Order then identifies five categories of exclusions, including the following:

(iii)   contracts or subcontracts whose value is equal to or less than the simplified acquisition threshold, as that term is defined in section 2.101 of the Federal Acquisition Regulation;

(iv)    employees who perform work outside the United States or its outlying areas, as those terms are defined in section 2.101 of the Federal Acquisition Regulation; or

(v)     subcontracts solely for the provision of products.

The Guidance issued on September 24th does little to clarify these categories of covered and excluded contracts other than to indicate that, from the federal government’s perspective anyway, the concept of a contract or contract-like instrument is incredibly broad.

For example, the Guidance broadly states that it applies to contracts covered by the Davis-Bacon Act without identifying any corresponding limitations.  Many federal laws that authorize federal assistance for construction through grants, loans, loan guarantees, and insurance are Davis-Bacon “related Acts.”  These related Acts include provisions that require Davis-Bacon labor standards apply to most federally assisted construction.  Notably, federal grants are an express exclusion in the Executive Order, and the Guidance does not refer to the “Davis-Bacon related Acts,” so there seems to be a legitimate argument that construction projects that are subject to Davis-Bacon’s prevailing wage requirements by the related Acts (and not Davis-Bacon itself) may not be impacted by the requirements of the Executive Order.

However, the Guidance does not address this issue, and the broadly worded language regarding what constitutes a covered contract creates an unnecessary source of dispute.  Further, the Guidance “strongly encourages” agencies to “incorporate a clause requiring compliance with this Guidance into contracts that are not covered or directly addressed by the order” where the contract or subcontract is under the Simplified Acquisition Threshold.  Further, agencies are urged to incorporate such a clause requiring contracts in existing contracts prior to the date upon which the order requires inclusion of the clause.  Such “encouragement” combined with the broad description of covered contracts in the Guidance significantly raises the risk that contracts that were not intended to be covered by the Executive Order may be deemed covered by a government agency or other government official.

There is limited time to resolve questions about which contracts are or are not subject to the vaccination mandate.

In considering this definition, the first question that arises is what constitutes a “location.”  A physical address?  Enclosed office space within a building for workers actively engaged on the project?  The FAQ’s included with the Guidance make clear that, once again, the government is taking an expansive view of this concept.  For example, separate floors or areas of a building, site, or facility are all deemed to constitute a covered contractor workplace unless the contractor “affirmatively determines” that covered contractor employees will not interact with or come into contact with a non-covered contractor employee in any way.  Examples of prohibited activities include:  interactions through use of common areas such as lobbies, security clearance areas, elevators, stairwells, meeting rooms, kitchens, dining areas, and parking garages.  Thus, in order to effectively exempt a sub-category of employees from the requirements of the executive order, an employer would need to ensure a complete and total separation of employee groups, which is going to be very difficult to achieve and enforce.

Employees Whose Work is “Connected With” a Covered Contract

Finally, the Guidance states that these requirements apply to employees other than just those who are employed as laborers or mechanics on the project or who are directly involved in the contract’s day-to-day operations.  Rather, the Executive Order is deemed to apply to employees who “perform duties necessary to the performance of the covered contract . . . such as human resources, billing, and legal review.”  Employees performing such work are deemed to be performing work in connection with a federal government contract.

This expansive definition will make it much harder to segregate workplaces and much more likely that a given location will be deemed to be a covered contractor workplace.

Covered federal contractors must review their covered employees’ documentation to prove their vaccination status under the Guidance.  As such, they must require their employees to show or provide them with a copy of their immunization/vaccination record.  Notably, the Guidance limits what type of proof is acceptable for this purpose.

Employers Must Comply with CDC Guidance Regarding Masking and Physical Distancing

Employers Must Determine Whether Employees Must Be Provided Accommodations

Please note that compliance with the Task Force’s Guidance may include determining if a covered employee must be provided an accommodation because of a disability or a sincerely held religious belief.  Generally speaking, covered contractors are responsible for considering and issuing decisions regarding requests for accommodations.